Drawn from Covenant and Kingdom, by Mike Breen available from 3dm. 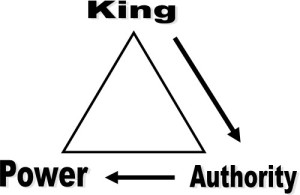 Ephesians 2:8-10 reminds us that we are not saved by good works. Rather we have been saved by grace through faith FOR good works. James 2:26 reminds us that faith without works is dead. The Kingdom Triangle reminds us that Jesus is not just our savior, he is our Sovereign—our Lord, and our King! It helps us appreciate the responsibility that falls to those who are citizens of God’s Kingdom, the authority God has given us, and how to exercise that authority.

As the key word for Covenant is “relationship”, two key words for Kingdom is “representation” and “responsibility.” As astonishing as it may seem, God gives us real responsibility in his kingdom and has chosen us to be his representatives on earth. The Apostle Paul even calls us ambassadors for Christ (2 Corinthians 5:20).

The idea of Kingdom unfolds from the beginning. When sin came into the Garden of Eden, the first covenant was broken and human beings lost their uninterrupted relationship with God. They also lost their ability to represent God as his royal emissaries. With the restoration of relationship through Abraham, the process of rebuilding our capacity to represent and even rule was begun.

Kingdom living begins with the recognition that God is the King of his people, and King of the universe.   When we act from within the authority that God has given us, we exercise Kingdom power. In short, when our relationship with God is right, we can be his representatives on earth. As God’s representatives, God works through us to do the sorts of things that only God can do to advance His Kingdom.

We see the three elements of Kingdom life unfold in the story of Joseph. (For this study, use Genesis 37, 39-41)

1) King: God is King. In the story of Joseph and his brothers, we see God ruling over the affairs of the world. It often seems that God is not present or active. It certainly seemed that way when Joseph’s brothers sold him into slavery and lied to their father to cover it up. It probably seemed so all the more when famine struck Canaan and threatened his family.   But God had a plan to preserve his people and the plan unfolded step-by-step through the life of Joseph who was a frail and flawed human being.

2) Authority: God, who is King grants authority to citizens of his kingdom. The authority we are given in the kingdom is the authority to represent God. However, it found in the lessons of humility. Humility – recognizing and accepting our own weaknesses and limits – opens us and makes us useful instruments in God’s hands.   In the story of Joseph, he is progressively humbled from the proud younger brother who tells his family that they will all bow to him to the man who is brought before Pharaoh and says “I cannot do it, but God will.”

3) Power: What a privilege it is for God to act in power through us. The ability to act in power in God’s Kingdom can be exercised as a direct result of having authority. With the authority of God firmly established in Joseph’s life, God works through him in power to lead in Egypt through seasons of plenty and famine, then to rescue his family, and finally to bless the world.   Closer to home, we see God’s power to forgive and reconcile as Joseph receives his brothers back into his life.

Scripture Highlights from the Story of Joseph:

You may have noticed how important it is to recognize that obedience flows from our God -given identity in the Covenant Triangle.  We obey when we humbly and joyfully accept the identity God has given us.  It is likewise important to remember that the exercise of spiritual power needs to flow flow from our humble and joyful acceptance of the authority God has given us. Authority is about placing ourselves in the right place before God. As we humbly recognize his position and our own, he authorizes us to exercise power on his behalf.

In a similar way, we need to learn to understand our authority in God’s Kingdom.  We need to know what we are able to do and learn to recognize when we have the authority to do so.  For example, Christians pray.  We have been given authority to pray and are encouraged many times in scripture to pray for others.  Do we know when to exercise that authority, when it is right to pause and pray with someone?  Do we know how to do so naturally and effectively such that heaven is stirred up on behalf of another person?

In short, God is a King.  We are royal citizens of God’s Kingdom.  Like a good Father and a wise king, God does not spoil us.  He gives us vital and important work to do in his kingdom and the authority and ability to do it.  When we exercise that authority, God’s kingdom advances in power.  And what joy!  We get to participate!

1) Why would God invite us into positions of responsibility in his Kingdom?

2) Can you think of helpful analogies for the Kingdom relationships?

4) Can you think of times when you have seen the power of God on display? Who did the power flow from? What did they do?

5) Do you know of anyone who is deeply confident in the authority entrusted to them as citizens of the Kingdom. Look up Galatians 5:22 (the Fruits of the Spirit). Did you notice these characteristics in their life?

6) Is God saying anything? What will you do about it?